The Human Measure - I Yard: Playing a City
Italy

The human Measure - I yard: playing a city

Two groups of people cross the city together through parade: a group of actors and a Choir that accompanies them with a constant sound. Each action is supported by the poetic word and its evocative power. Performers, Choir and Word celebrate life, the birth of a new hope embodied by a perfect living being, Hope destined to lift the fortunes of an old and decaying world. The parade is joyful, it is a celebration. But something doesn't work, during its triumphal advance the body of the perfect being jams and falls, as if dead. The two groups are faced with the failure and frustration that comes with every fall. How does one get back up? How do you cope with failure? Actors and Choir are called to answer these questions. Called to transform despair, a fallen body and their bodies into something else, together. Only through collective collaboration can a new course, a new celebration, a new faith, which also involves the spectators and becomes a ritual, begin.

with the artists participating in the Seminar of creation and with the citizens of the territory of Colonia. 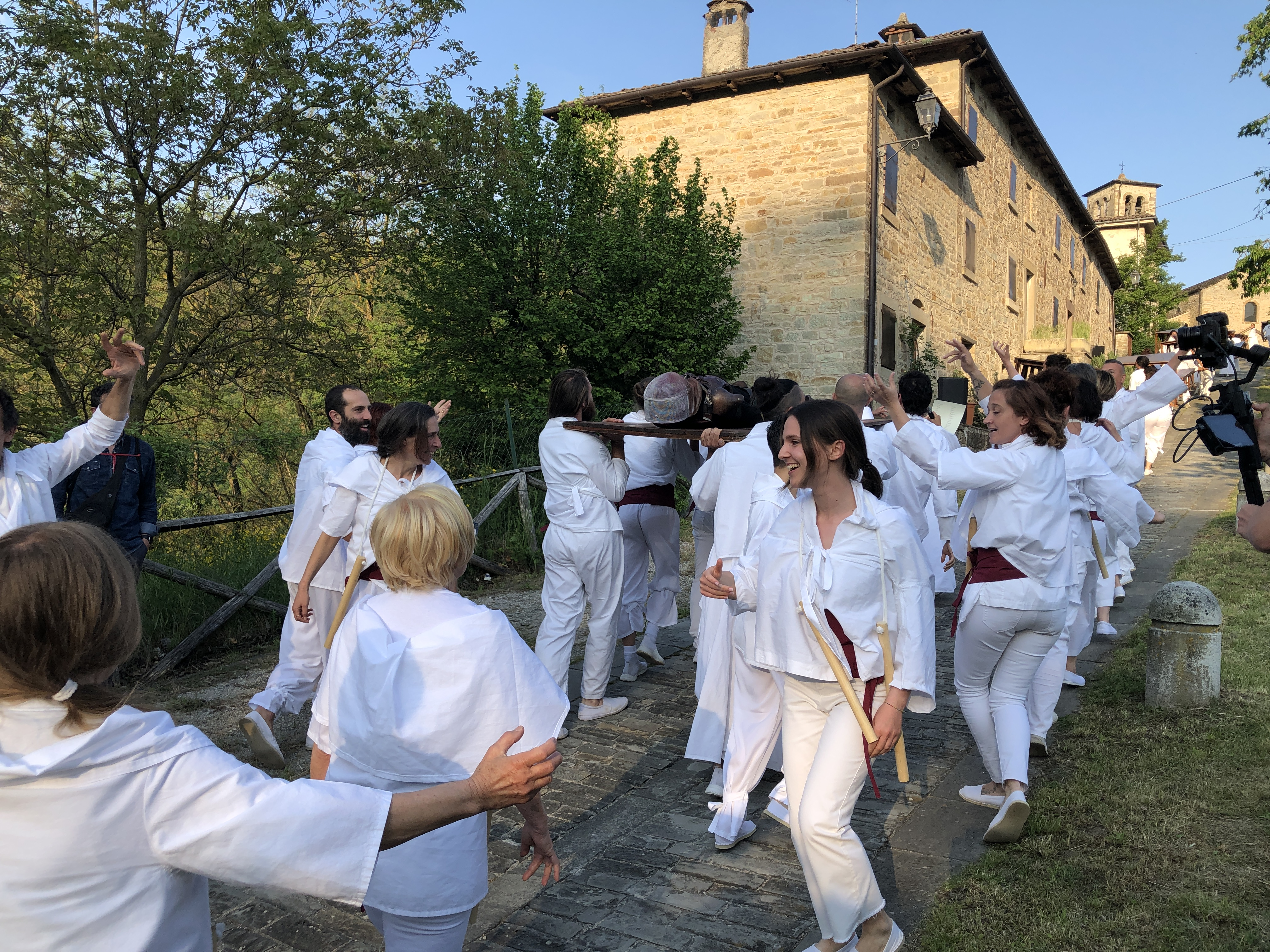 Playing a city. idea of a show for 30 performers and 100 special characters is a performance that runs through the streets of a city and ends in a square.

A single body, made up of the bodies of the performers, traverses the streets of a city - like a tableau vivant that gradually, as it progresses along a pre-established path, becomes a moving tableau. At the same time, the city emits sounds, indistinct sounds that are slowly overlaid by another score that becomes more precise and grows in intensity as the performance progresses. The special performers play and create this new sound score. They use every possible instrument: musical instruments as well as everyday tools and utensils. The sound score also includes singing.

The Body that moves in the form of a moving tableau is initially compact but is animated by internal thrusts that lead it to change, to explode. It is a single body composed of different individualities.

As they move forward in the urban space, the bodies of the performers meet the elements of the city (buildings, trees, flowerbeds, cars, human beings, street furniture) and enter into a relationship with them.

Some performers slow down, stop to observe the city, others continue, others get lost in unfamiliar streets. Everyone discovers the place they are passing through and enters it, in their own way.

Some enter businesses to present their little show, some attract passers-by with a story, some dance, some enter buildings and look out of windows and balconies to perform actions agreed upon with the director.

Each performer will follow his own path. Each deviation from the main path is a solo, a personal tale of a Metamorphosis and of one's own way of relating to The Sacred and to the world.

Crossing the city to change it with one's presence and actions.

In the meantime, the main body continues to advance: some of the performers never stray from the pre-established path but continue the procession in which they stage a story linked to creation: the seed is born, lives, dies, is buried in the womb of the Great Mother - the Earth - then blossoms back to life to die again and be reborn, without interruption. An action that proceeds in a loop and that stages one of the themes of Faith at every latitude: belief in rebirth/resurrection and in the eternal cycle of the seasons, of the earth and of life.

The other performers come and go from the main body, move away and then return to join the procession. Thus the Main Body changes shape, loses fragments, frays, rejoins the lost elements and then loses them again. But there is a sound that continues to keep all the perfomers connected: in the background we hear a song and a sound, which each one repeats or declines individually - the perfomers improvise to a score, which is the same for everyone. We can call this sound the Sound of Creation or the Sound of the Initial Body. This is the action of the special performers.

At the end of its journey, in a large square, the initial Body is recomposed: all the performers return. And the Body changes shape, again, transforms itself into a joyful creature ready to explode in a dance that involves everyone, together and at the same time: performers, special figurants - who continue to play - and ordinary spectators. This is how the ritual is performed.

Performers, special figures and spectators are now on the same level, participants in the same community and the same action: all actors and spectators of what is happening. All together they dance, sing, beat the rhythm, eat and drink.

Any visual materials related to the project - video / pictures / moodboard

No material at the moment, they will be available around January

Why is the topic of Faith important (for you)? I live in a world from which mystery is slowly disappearing, but I grew up in a world where mystery still existed. I feel that I have lost something in this transition.

In my daily experience any profession of faith is almost always only intimate, personal.

When faith manages to meet the sense of the sacred and the mystery, it also meets the community. The community is born on this basis. From this point of view, I feel like an orphan.

For me, faith, community, mystery and the sense of the sacred are related matters. And when I have come across them, it has almost always been through the practice of theatre.

I'm happy to work with a large group of people, which I rarely do. I almost always work alone. I hope to come across a new reason to continue.  And then I hope to rediscover a form of faith that I have not been able to fix or find for a long time. Faith in the work and in the discoveries to which theatre work leads.

(only for non-native teams :)

Rhythm, in whatever form it manifests itself (sound, visual, physical, graphic).

The concatenation of events.